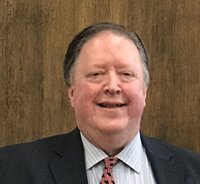 William A. “Bill” Wright, age 62, was born to Vergil N. Wright and Sharlene Wright in Alliance, Nebraska but soon moved to Scott City, Kansas where he spent his childhood. He graduated from Scott Community High School in 1977 and attended Fort Hays State University, graduating with honors in 1981 with a degree in Political Science. Bill then attended the University of Kansas Law School, graduating in 1984 with honors with a Juris Doctor degree. Soon after graduating Bill passed the bar and opened a law practice in his hometown of Scott City, and later expanded his practice to Garden City, Kansas.

Bill enjoyed meeting others and did so in college as a member of the Sigma Chi Fraternity and the Student Government Association. He had a strong faith and will to help others in his law practice, and by his involvement in the Masonic Anthem Lodge #284 in Scott City, the ISIS Shrine of Salina, Kansas, Scottish Rite, and the Plymell Union Church. Bill was known in his community as an excellent attorney and a committed advocate for his clients in seeking justice.  Bill enjoyed watching KU sports, collecting coins, advocating for his political beliefs, and meeting his close friends who shared his passion for law for lawyer lunch or at the Tiki Lounge.

Bill loved his family tremendously and thoroughly enjoyed family activities with his children and grandchildren.  He was a blessing to his family and friends and will be greatly missed.

He was preceded in death by grandparents William and Francis Reed of Alliance, NE and Alfred and Alda Wright of Scott City, KS.

A Celebration of Life will be held at 2:00 p.m. Wednesday, January 5th, 2022 at Price & Sons Funeral Home, 620 N. Main Street, Garden City, KS.  Services will be Livestreamed at www.priceandsons.com.

In lieu of flowers, donations can be written to Family Ever After in care of Price & Sons Funeral Home, 620 N. Main Street, Garden City, KS.